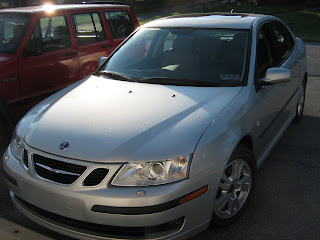 Normally, I wouldn't post about a new car. But first of all, I've been waiting for this vehicle for a long, long time and secondly, there is an interesting story to go with it. I've always wanted a Saab. I've been driving clunkers for longer than I care to think about. I never really cared too much about what color or model I wanted, I just felt that I'd grab one some day if I could find a good deal and when one of the current family clunkers had to be replaced. That day came last week and I was able to find the vehicle shown above, much to my delight.

The interesting part is this. When the book "The Secret" came out. I read it and did my usual thing with getting excited about a concept that was going to be life changing, only to forget about it and go back to my old routine two weeks later. But during the excitement period, I did what the book suggested and made a "vision board" with photos of things I wanted and hoped to accomplish. The vision board got buried in my office with all the other junk in there and I haven't seen it since the book first came out. As I was cleaning my office on Monday, I came across the vision board. On it, there is a photo of the exact car I bought. Same model, same color, same everything. How weird is that?

There is also a photo of the Eiffel Tower on there. So... next stop... Paris. 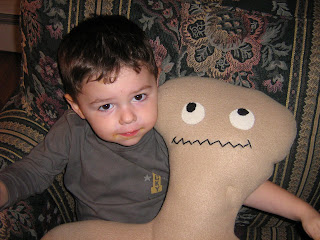 Colin is into "monsties". There is a line of stuffed "monster" toys that he loves. I tried to find them online to put the link here, but I don't know what the official name is. Anyhow, I came up with my own version for him. He seems to like it. I called it "octa-monstie" but his father corrected me and said it's "penta-monstie". Yeah, whatever. :-) 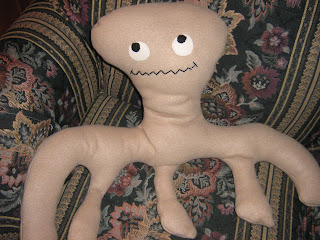 My sister purchased the cutest knitted wrap in Colorado. It is genius in it's style and simplicity. So easily copied. I can't believe I've never seen a pattern like it before. It's a simple stockinette stitch rectangle... but the buttons, and button hole placement make it unique. Once I get my Christmas knitting out of the way, I'm definitely going to play with copying that little number. 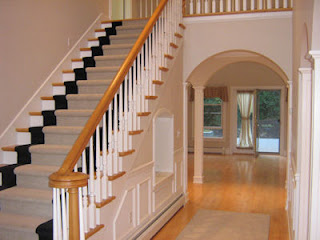 It's not like I don't have anything to do in the evenings. Believe me, I do. But on Wednesday night I got it into my head that I'd do a "Twilight Open House". They work in the cities. People come. I was excited. I had that house looking like something out of a movie. Perfect lighting (it was all adjustable), strategically placed flowers, the works. To tell you the truth, I didn't even really care if the people who came were just nosey neighbors or people who simply wanted to see a beautiful home... lookers. That's ok with me. I just like to talk to people.
So one couple came. They happened to be out walking. I guess we're just not quite ready for Twilight Open Houses here. And it's too bad. Because some houses are just beautiful at night.
Knitting news... slow progress on all projects. But I did finish a new "Monstie" for Colin. Photos to come. 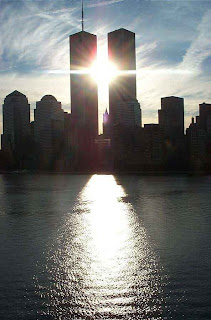 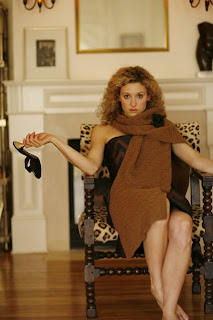 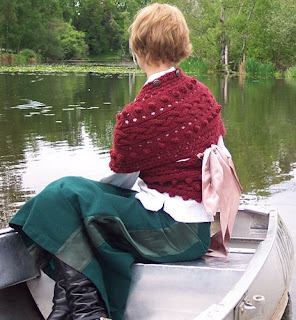 I'm obsessed. I SO didn't need this right now! 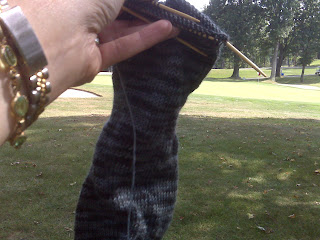 Once again... golf course knitting. Another successful Anne E. Barnes golf tournament to benefit the Multiple Sclerosis Society. And once again, no one at my hole got a hole in one. One of these days it's going to happen. However, this year, I did get a bit of surprise while sitting in my usual spot. I had a visitor. A four foot long black slithering visitor. Yep. Mr. Black Snake. I have to say I've always enjoyed my day on the golf course. Unfortunately, not so much anymore. I'm already dreading next year. And it's a shame. Now I'll just be terrified that it will happen again.

And, yes, I know they are harmless. But truly, it might as well have been a King Cobra.

Steeler season is upon us. Steeler mania has begun in the family. I'm the odd man out this time of year. It's not that I don't like it, I just can't get into it. I've tried. I'd like nothing more than to be as excited over it as the rest of my family. Including the pint sized members.

I've tried to force myself into jumping on board the big Steeler band wagon. But, honestly, I just don't really feel it. :-( But I do want them to win as long as I don't have to watch!
So plans for Kiawah have been decided. Four weeks from now. Which means I have four weeks to lose 20 lbs. Ugh.

Can you say... Attention Deficit Disorder?
(two out of three of my children were diagnosed with it... I wonder why) 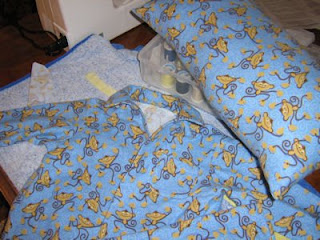 Colin's PJ's. Ok... not Colin's PJ's. They are too small for him.
Hmmn...
I know just who to give them to.
They just need the buttons sewn on. 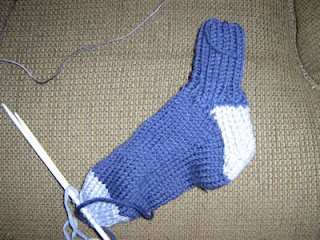 Heavy socks for Colin for Winter.
One sock to go. 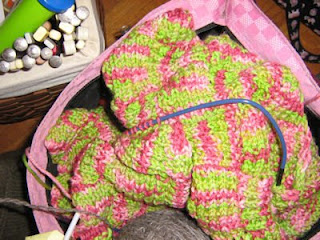 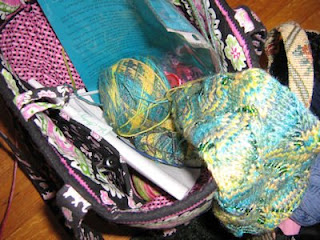 Beaded scarf. I like this project.
Why did I abandon it? 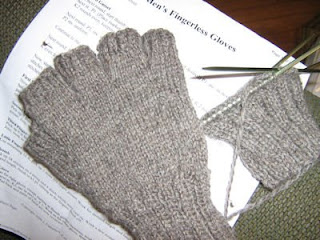 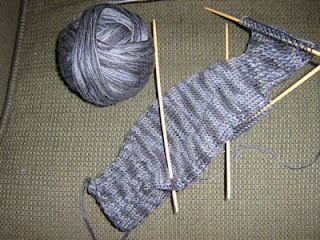 Sock for me.
Really, really taking a backseat for the time being.
And... sadly...
there are more.