I worked on the brown garter stitch jacket for Colin last night. It's going to be cute but it's so boring to knit I almost have to put a gun to my head to pick it up. And speaking of Colin, here is his 3 month photo. The kid is cute. What can I say? 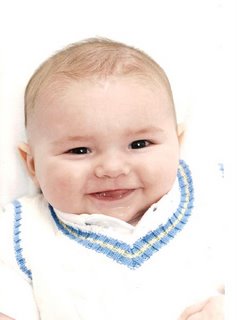 I hit my head coming up out of a basement yesterday. I hit it hard. I actually saw stars. I'm not sure how I remained conscious. I realized that I had forgotten to turn a light out so I went back down and I was hurrying back up the steps. Some basements have this hideously low thing when you're coming up out of them. What were people thinking when they designed stupid things like that? It still hurts today. I've had a headache since I did it. Being a real estate agent is a dangerous job. According to statistics, there were 57 violent crimes committed against real estate agents in 2001 and 6 of them were fatal. I'm sure that number has risen in the last few years. But it's going to be the stupidity factor that gets me in the end.

As for your little head-into-wall incident, I feel your pain. I am constantly walking into walls, doorways, furniture, you name it. Yesterday I managed to bang not one but two joints (knee and elbow) into my desk at work. We must share some special talent.

how cute! you are a family of lookers, though, so how could he not be?

our basement steps are crazy low ceiling-ed and jake wacks his head all the time. i am so short that i am safe. i manage to hurt myself on everything else though. one would think i am active or something.

as for the scary stats on realtor violence, i hope that you take precautions and carry mace or something. that made my stomach drop when you said that. have you taken a self defense class? i think you should. and make sure that your cell phone is easy to get to and ready to dial 911 should you ever need to. so not cool. now i am worried about you.