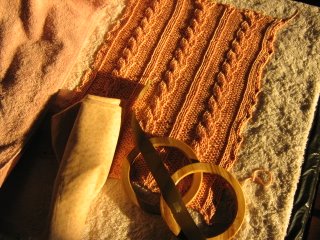 Since I don't have any of my own knitting that is interesting enough to display, I'll show you my sister's first knitting project in about 35 years. She is doing a peach cotton Erin Bag in Kertzer Butterfly. It turned out great. I'm telling you, it's like riding a bicycle. You never forget. I will have to say though that she is getting a little ambitious with her thoughts on what to knit on the way to London next week. She was choosing patterns last night that I would have to think twice about. How will she manage without me sitting beside her? Shouldn't I go along? Doesn't it just make sense that she should buy me a ticket? She can't do this alone! Ok. Nice try.

So, yes, I've boarded the train to FAFSA hell... again. Here is the really, really weird thing. I have a daughter who graduated college. We filled out the FAFSA forms for her for 4 years. Never a problem. Then we had another daughter start and we filled out the forms for her for 4 years. Never a problem. So the son starts last year and all of the sudden it's bad. Very bad. Seriously, his money came in on the last day. We thought we were going to have to have him sit out a semester to get it straightened out. And this was after he took a year off between high school and college already, and had finally made up his mind to do this.... and he was excited about it which was a miracle. Truly, I nearly lost my mind over it. So this year, we started early, did everything in a manner that we were sure would guarantee us a problem free experience, and it all went bad. Again. There is no explanation. And try to get someone on the phone who's helpful. You can, but it takes about 5 tries. My advice is to just keep calling back until you get someone who knows what they are talking about because the majority of them don't. I need to win the lottery so I don't have to go through this again next year. One more year of this and I'll be living in a rubber room somewhere. Send yarn.